ImagAbility will be drawing on its magnetic allure in a dynamic demonstration of its new WEDGNETiX at the American International Toy Fair, held in New York City, from February 14-17.  The company will have an irresistible pull for attendees to try the latest advancement in WEDGiTS building blocks in Booth #5523 at the Jacob Javits Convention Center. 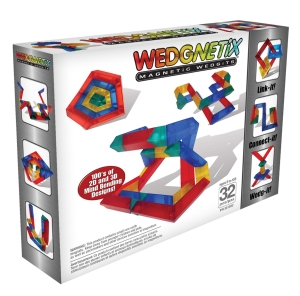 Rock McKinley, Vice President of Sales for ImagAbility, explained, “WEDGNETiX were created to add even more open ended play patterns for children.  With WEDGNETiX, a child, or adult, can explore complex geometry and greater visual appreciation for 2D to 3D relationships. It sounds technical, but it is really just fun and kids don’t realize how educational it is.”

The unique part about WEDGNETiX is the amazing building process it provides. With WEDGNETiX, you can create original 2D designs that include a square, a rectangle and a hexagon. This is accomplished through the WEDGNETiX design that has a magnet within each component.  Specifically, each WEDGNETiX bar has an embedded magnet on one end and a metal cap on the opposite end. This allows two WEDGNETiX bars to fully rotate around each other for a 360-degree rotation. With WEDGNETiX, you can rotate one half of a hexagon upward to reveal a 3D representation of a hexagon.

WEDGNETiX do not require instructions like other popular building block products. WEDGNETiX follow the WEDGiTS toy line in that it’s open-ended design allows kids to create freely. ImagAbility does provide design ideas for kids to progress from 2D into 3D constructions, however, there isn’t any “only one way to do things” step-by-step instruction.

ImagAbility points out the extreme safety of WEDGNETiX: A key criterion in the engineering design of the WEDGNETiX bar relieves any consumer safety concern. Each bar is a two-sided construction that has a male and a female component. When the two parts mate together they literally sandwich the cylindrical magnet between the parts. The plastic parts, made of an extremely strong ABS plastic, are pulled together, which basically melds the plastic into a single component. In addition, ImagAbility clearly identifies caution on the front of each package, that WEDGNETiX contains magnets. The product is in compliance to the USA’s CPSIA and international ASTM FM963 certifications.

About WEDGiTS: The basic set of WEDGiTS building block toys resemble square donuts and diamonds with angled edges.  The five, primary pieces of the WEDGiTS toy are graduated in size, so, the blocks actually nest together and stack into the shape of a pyramid.  Mathematicians refer to these block shapes as rhombus and octahedrons.  Each block is a different primary color, so, you can imagine a rainbow effect of color in each design a child builds. The design of each block naturally aligns in both vertical and horizontal patterns for an open-ended manipulative.

In addition to WEDGNETiX and various traditional WEDGiTS sets, other products in the WEDGiTS line include, WEDGiTS on Wheels (WOW) and Mini WEDGiTS™, as well as WEDGiTS school activity packs, building table platforms and other accessories.

About ImagAbility: ImagAbility, Inc. was originally founded in 1997 as the family business, R/C Products. The initials represent Rock & Caron McKinley, the company’s founders and owners.  One of the reasons for starting the company was to have their children learn about business.  By being involved in a family business, the desire was to help motivate their children in preparation for their college planning. The McKinley family has traveled extensively in America and Europe introducing, demonstrating and selling the WEDGiTS product line.  As the WEDGiTS product line became more and more popular in schools across America, Australia, Canada, and Europe, the company changed its’ business structure and incorporated to ImagAbility, Inc. More information and a complete product line description are available on the company website at www.wedgits.com and for the most immediate information, the company encourages social media interaction on Facebook, Twitter, Pinterest, Instagram and YouTube.