Tucker Toys will sponsor the Kids Zone, a special section full of activities for kids of all ages that is free to all attendees of the AUDL Championship Weekend. The Tucker Toys’ “Ultimate” Kids Zone is a super play area featuring all of Tucker’s sports-re 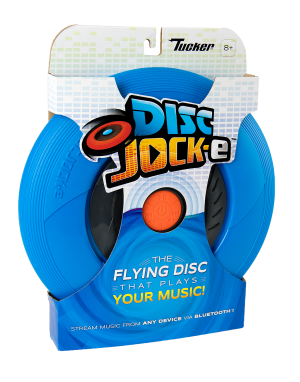 As the regular season AUDL sponsor, Tucker’s sponsorship focused on promoting the league games through the AUDL Disc Jock-e Connection of the Week, where a highlight clip of the best pass and catch series from the league games is singled out as the best sequence of the week.

Mark Nathan, CEO and President of Tucker Toys, said, “It’s great working with the AUDL. It’s a perfect match for our new Disc Jock-e. We’ve connected things people love like favorite music and a game of catch with a flying disc. Now we’ve been able to connect a fun way for fans to emulate the game and introduce a young generation to the sport.”

The American Ultimate Disc League (AUDL) is the first and largest professional ultimate league in the world, with 24 teams throughout Canada and the United States. Championship Weekend will mark the culmination of 168 regular season games, with the best teams from each of the league’s four divisions descending upon Montreal, home of the Montreal Royal, to compete in a Final Four-styled playoff. Two semifinal games will be played on Saturday, August 26, with a championship game to follow on Sunday, August 27.  Tickets are on sale now for the sixth annual AUDL Championship Weekend.

Last year, a league-record 3,400 fans packed into Breese Stevens Field in Madison, Wisconsin for the 2016 AUDL Championship Weekend. “We expect Montreal to raise that bar even higher,” said AUDL Commissioner Steve Gordon. “The city has a rabid ultimate community, attends Royal games in record numbers and provides the perfect backdrop for our season-crowning event. With the support of the strong Royal ownership, we expect this to be the best Championship Weekend yet. We couldn’t be more excited!”

About the AUDL: The sport of ultimate has exploded in growth in recent years—more than 5 million people participated in the sport in the U.S. in 2014, making it one of the fastest growing sports worldwide. The AUDL was established in 2012 to showcase the best athletes in ultimate. AUDL is the first and largest professional ultimate league in the world. It strives to maintain the sport’s rich history, and its 24 franchises embody the robust spirit of ultimate’s players, fans, and community alike. AUDL games are available to watch on AUDL.TV and you can follow all of the latest news and highlights on Facebook, Twitter, Instagram and YouTube.

About Tucker Toys’ Disc Jock-e: Soaring through the airwaves, the Disc Jock-e (MSRP $24.99) is great for ages 8 and up. It’s a durable, Bluetooth flying disc that plays your music with clear big sound by streaming or syncing to any playlist from a phone, tablet or computer. The Disc Jock-e is great for the backyard, beach, pool or park, and even when you’re not playing the best sounding game of catch, you’ll never miss a beat with the coolest outdoor speaker ever!

About Tucker Toys: Tucker Toys, based in Hamilton, NJ, brings to market a line of toys with far wider ranges of use, spanning all ages and transforming almost all environments into playable ones. Tucker Toys evolved from marketing only through a few international distributors to over 50 countries currently with a strong public outreach, engaging kids and families directly. Every toy created by Tucker has received awards from various prestigious organizations including Mom’s Choice, Parents’ Choice, The National Parenting Center, National Parenting Publications of America, The Toy Insider and countless others. Recently, Tucker’s toys received special needs approval by AblePlay, a division of Lekotek, proving the versatility of Tucker’s toy innovation that brings value to parents and benefits to children across the spectrum. Products from Tucker Toys include the internationally award-winning Phlat Ball®, Crush-It! Bat®, Trick Shot Sports®, Zoingo Boingo® Pogo, and the E-Z Grip® Ball line. More information is available at TuckerToys.com and to interact with the company, follow us on our social media outlets: Facebook, Twitter, Pinterest, Instagram and YouTube.