Grantsville, MD – (April 28, 2016) – Be on the lOOk out for more Ty® Beanie Boos™ games as Tactic Games, Inc. today announced the launch of several new games to its licensed line from Ty, Inc.

The new products from Tactic Games are additions to its preschool and children’s games category that feature the adorably cute Ty® Beanie Boos™ branded character property.

Jay Knox, President of Tactic Games, said, “Ty is the number one plush company in the world and the Beanie Boos™ have been the perfect property to bring engaging interest and a refreshing new look to children’s games. Our initial Beanie Boos Friends game has led the way to a very successful line of products. With Ty, Tactic is now able to develop even more fun, educational games featuring the Beanie Boos™ characters.”

The new line-up of games includes: 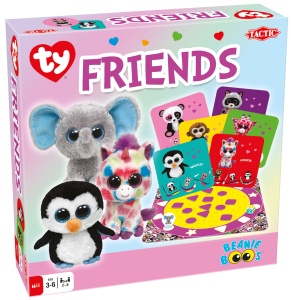 About Ty, Inc: Ty Inc. is the largest manufacturer of plush in the world. Peek-a-Boo’s are the latest innovation from Ty, allowing you to use your phones hands-free and eliminate “tech neck”. For more information visit Ty.com.

About Tactic Games: Tactic Group® is an international and fast growing developer and marketer of board games in Europe, now launching in the U.S. and Canada.  For the past 49 years, the Finnish board game company has provided consumers with innovative, high-quality products that have been warmly received by the public, including award-winning Mölkky®, Alias and iKNOW®.  Their mission is to produce entertaining games that offer moments of genuine delight and entertainment to family and friends the world over. To discover more about Tactic’s wide range of games, visit www.tactic.net/USA and get all of the most up-to-date, immediate information by interacting with the company on its social media channels: Facebook, Twitter, Pinterest, Instagram and YouTube.