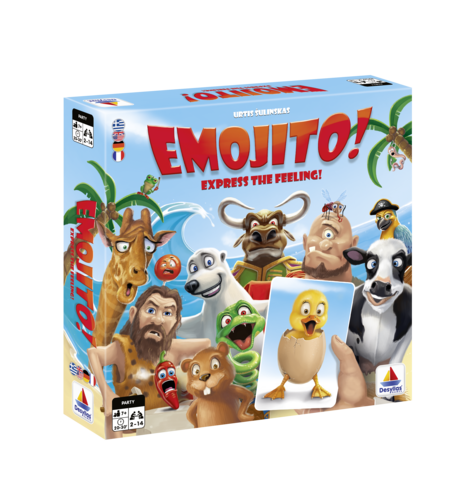 When it comes to non-verbal cues, body language and purposeful facial demonstrations can you make the match? That’s the hilarious unspoken premise of Tactic’s new party game, Emojito! (MSRP $14.99 for 2-7 players ages 8 and up). In this game, players compete by expressing themselves without words and acting out their emotions.

Jay Knox, President of Tactic Games, said, “Emojito! is the engaging game where making funny faces can be your best advantage. The immediate interactive quality of the game makes Emojito! something all ages can enjoy together.”

To play Emojito!, each player (or team) must only use either sounds or facial expressions to portray the emotion shown on their Emotion Card. Then, that card is mixed with six other cards and spread around the seven-sided numbered board. The other players then try to guess the emotion that was demonstrated by picking the picture and number they believe correlates with the emotion. For each correct guess, the players move their token around the numbered board. The first to complete five rounds around the board is the winner! Emojito! requires players to think and use an awareness of nonverbal cues, sounds and body language to beat the competition!

About Tactic Games: Tactic Group® is an international and fast growing developer and marketer of board games in Europe, now launching in the U.S. and Canada.  For 50 years, the Finnish board game company has provided consumers with innovative, high-quality products that have been warmly received by the public, including award-winning Mölkky® and iKNOW®.  Their mission is to produce entertaining games that offer moments of genuine delight and entertainment to family and friends the world over. To discover more about Tactic’s wide range of games, visit www.tactic.net and get all of the most up-to-date, immediate information by interacting with the company on its social media channels: Facebook, Twitter, Pinterest, Instagram and YouTube.