SLIDE OVER TIC-TAC-TOE!  THERE’S A NEW GAME IN TOWN
Puzzle Lovers Will Flip Out Over Slideways™ from R&R Games

Tampa, FL – (April 25, 2015) – Let’s face it. The classic game of tic-tac-toe that we all grew up playing can get pretty boring once you’ve figured it out and every game ends in a tie. R&R Games has changed all that with Slideways™, the puzzling new game that gives tic-tac-toe an extreme makeover with a flip-and-slide dimension that keeps the game fresh, fun and exciting. 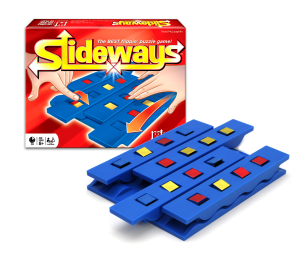 Slideways is a challenging game of strategy and logic, where players flip over colors to get four in a row. But just when you think you’re about to slide into victory, your opponent can slide a bar over and it’s a whole new ballgame!

“We’re excited to offer this mind-bending new twist on a classic puzzle game,” said Frank DiLorenzo, R&R Games’ President. “As fun and simple as Slideways is for kids, it’s amazing how intensely fun and addictive it is for adults too.”

The game unit’s magnetic bars attach to the game base, so it’s self-contained and easily portable. It’s perfect to take along and play anywhere, anytime, and makes a great travel game.

Slideways is for ages 8+; MSRP $15.95. Available now at specialty toy and game stores nationwide and at www.RnRGames.com.

About R&R Games, Inc. Established in 1996, R&R Games has held true to company founder Frank DiLorenzo’s commitment to offer engaging and challenging fun and entertainment through original games and toys. Its ever-expanding product line of over 50 titles includes new games for 2015, Caffeine Rush, Slideways, Cup-A-Cup, Spit it Out, Spike and Spellcaster. Other notable award-winning games include Hanabi, winner of the 2013 Spiel des Jahres Award, Strike a Pose, Smarty Party, 1st & Goal, Coal Baron, Qin, and Time’s Up, the multiple award-winning party game, with over two million copies sold. R&R has also taken the fun mobile for iOS and Android players, with original game apps and online versions of their popular board games. R&R Games is based in Tampa, Florida. Visit www.RnRGames.com and connect with us on Twitter, Facebook, and Pinterest.