Westlake, OH – (Sept. 5, 2019) – The Rush Is On! Party Animal, Inc. kicks off the 2019-2020 football season with the nationwide release of its all-new NFL TeenyMates collection. This year’s set features the NFL’s top stars in the league’s special edition Color Rush uniforms. 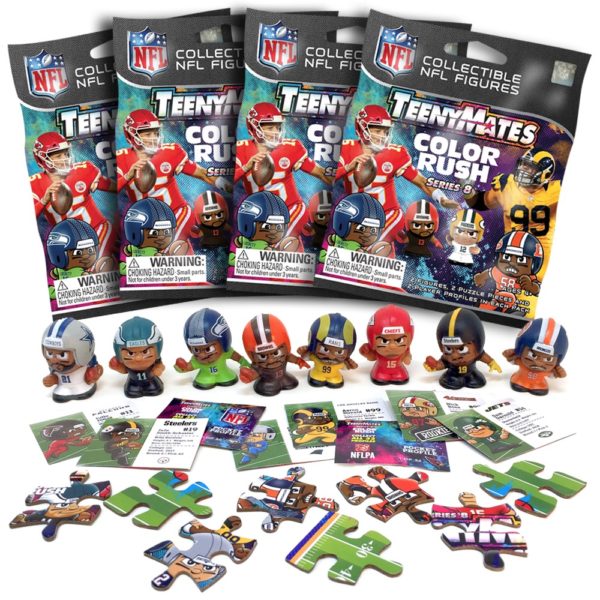 The NFL TeenyMates Series 8 includes representation of all 32 NFL teams plus rare, hard to find figures.

Bryan Cantrall, President of Party Animal, said, “TeenyMates are one of Party Animal’s super fun collectible product lines. Each year there is greater anticipation and excitement over the release of our latest player figures. This year, we were able to offer an extra special twist on the collection with the NFL’s cool Color Rush uniform styles.”

The initial Blind Pack Bundle (MSRP: $19.96 for 4 packs) in the Party Animal NFL Series 8 lineup are packaged as 2 random 1″ NFL TeenyMates Color Rush player figures with Player Profile cards and 2 Double-Sided Puzzle Pieces. Each pack also comes with a TeenyMates Collector’s Checklist for fans to mark off each figure as they acquire them. The puzzle pieces build to complete a 35-piece double sided illustration (mini poster on one side and a football field on the other).

Party Animal was sure to add to the fun by offering 6 Rare Figures in its Series 8. Fans will be searching for the:

Party Animal recommends its TeenyMates for ages 4 and up. All of the TeenyMates sets, including MLB, NHL, Soccer, previous NFL Series’, as well as Team Sets, Gift Sets, Locker Room Sets, Keychains, and Candy Dispensers are available at www.partyanimalinc.com

About Party Animal Inc.: Party Animal, Inc. is a leading manufacturer of professional and collegiate sports and entertainment licensed toys, flags and decor based in the westside Cleveland suburb of Westlake, OH.  Launched by entrepreneur Jim Cantrall in 1989, the company has grown from a small business selling party signs (hence the name) into a major manufacturer of over 1,000 licensed products. As a 29-year NFL licensee, Party Animal has a long-established reputation for offering premium quality licensed products and outstanding customer service. The Party Animal extensive lineup includes licensed products with Warner Bros., NFL, NFLPA, MLB, NHL, NBA, WWE and over 40 colleges and universities. Fans can find our products available at national and independent retail stores all across the U.S., Canada and Mexico, as well as online everywhere, including the official PartyAnimal webstore.  For more information, visit www.partyanimalinc.com and interact with the company on Facebook, Twitter, and Instagram.