Cleveland, OH – (May 2, 2013) – Ziggy & Friends, Inc. today announced the signing of two new licensing agreements for Ziggy, the comic page iconic everyman. All new Ziggywear will arrive from 5th Sun later this year and new 2013 calendars will be available this Fall from Willow Creek Press.

5th Sun, a “hot” lifestyle apparel manufacturer known for its novelty licensed apparel for mass market retail, is set to release multiple Ziggy tee designs in both youth and adult sizes for mass market sale, as well as a separate shelf-stock line of exclusive t-shirt designs for sale in specialty stores.

“We’re extremely excited to be working with 5th Sun.  They’re concepts and designs for Ziggy are fun and engaging styles that we’ve been looking to distribute for Ziggy,” Tom Wilson, artist and president of Ziggy & Friends, said. “We can’t wait to have Ziggywear readily available to everyone everywhere.”

The new shirts, which will hit stores later this year, arrive just ahead of the new 2013 Ziggy published products from Willow Creek Press.  All new Ziggy page-a-day daily calendars, monthly wall calendars and personal planners are all ready to help consumers keep up with their schedules in a Ziggy-fun way throughout 2013. 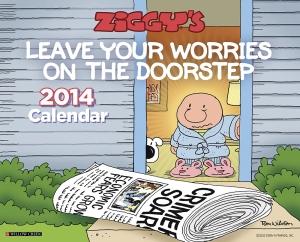 Jeremy Petrie, Vice President of Sales for Willow Creek Press, said, “We are thrilled to launch the new Ziggy calendars. The character’s appeal is universal and having the various styles of calendars is a great way to engage all of the Ziggy fans out there with fun optimistic reminders every day, all year long.”

More Ziggy information about its current licenses and open categories will be available at Licensing Expo 2013 held in Las Vegas in June.  Look for Ziggy licensing agents at Moxie & Company, Inc.

About Fifth Sun: Fifth Sun is located in Chico, California and has been a leading supplier of graphic apparel for the retail clothing industry for over 18 years. We are nationally recognized as a progressive and creative supplier of trend right and art intensive apparel that includes tees, polos, woven shirts and jackets. Fifth Sun produces Licensed and Private label apparel for specialty chains such as Hot Topic, Urban Outfitters and Old Navy as well as most major National Chains such as Target, JCPenney, Kohl’s and Wal-Mart as well as over 3500 independent accounts. Our licensing relationships include Lucas Films, Rovio/Angry Birds, Warner Brothers, Nickelodeon, Paramount, Fox, HBO and Cartoon Network. More information is available at http://www.5sun.com/

About Willow Creek Press: Our location in the Wisconsin north woods helps keep Willow Creek Press off the publishing world’s radar. Around here, we’re more accustomed to landing walleyes and muskies than big books and authors – events hardly worthy of note in Publisher’s Weekly. But, a few years ago we did get noticed with the release of Just Labs, a unique and colorful tribute to Labrador retrievers. The book quickly became a bestseller (now with 250,000 copies in print) and frankly startled us with its success. We were not surprised for long, however, and now an entire line of popular Willow Creek Press titles evokes the myriad joys of dog and cat ownership. Today Willow Creek Press is a publisher of fine quality books and calendars focusing on a variety of topics that relate to dogs, cats, horses and other pets, North American nature and wildlife, gardening, outdoor sports, and cooking, including books of interest to anglers and hunters. Many of the books Willow Creek produces could be described as coffee-table books, with large formats and generous use of color photographs. We seek distinctive, well-composed, crisply-focused images, and favor natural settings and candid activities rather than studio shots. We are known for these high-quality, light-hearted books and feature over 40 such titles in a continually-expanding line. More information is available at http://willowcreekpress.com/

About Ziggy: Ziggy & Friends, Inc. was formed in 1978 by cartoonist Tom Wilson Sr. who created the internationally syndicated cartoon, Ziggy in 1971.  The company, headquartered in Cleveland, Ohio, handles the creative and business concerns of the evergreen character.  Tom Wilson Jr., president of Ziggy & Friends, Inc., has been drawing Ziggy since 1987, after the retirement of his father. Distributed through Universal Press Syndicate, a division of Andrews McMeel Universal, Ziggy is published in more than 600 newspapers, reaching 75 million faithful readers daily, who identify with ZIGGY’s hopes, worries and inspirations; always with a dose of humor.  Ziggy, now in syndication for over four decades, also maintains an online presence through www.ziggyzone.com. Ziggy’s inspiring message extends to the Leukemia & Lymphoma Society, where he serves as an official spokescharacter.