New York, NY – (February 15, 2015) – FoxMind wants to make sure you won’t be the last mouse standing without a chance to play its addictively fun new games.

Last Mouse Lost is FoxMind’s quick, easy, and smart game without any loose parts. Its unique design, fun factor and affordable price point makes it an ideal gift for people of every age.

Originally launched at The American International Toy Fair last year, Last Mouse Lost (MSRP $7.99) has scurried to be one of FoxMind’s best-selling products. Now, with more supply available and adding retailers in several alternative channels, the company traps even more people into its addictive fun game play.  The company will be giving away FREE samples* of Last Mouse Lost from its booth (#6109) during the 2015 American International Toy Fair, held at the Jacob Javits Convention Center in New York City from Feb 14-17.

The only catch to gaining a free Last Mouse Lost is that attendees must stop by to play a quick round of Last Mouse Lost with the FoxMind game genius’s and see a short demonstration of FoxMind’s new Go Bong! game (MSRP $7.99), a similar style game to Last Mouse Lost from the same great game inventors – The Coster Family. 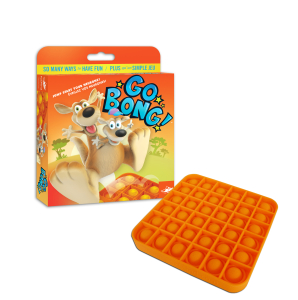 st Mouse Lost is technically a quick thinking reasoning, math strategy game that can have planned moves, but with every turn, the trap can be set and your next move might be the last mouse – and you lost. Players want to play over and over again until they win a round.”

Last Mouse Lost is a self-contained two-player game that is perfect for passing the time while traveling or used simply for stress relief because it is quite relaxing to squish the mice . The circular rubberized board has rows of puffed up bubble-like mounds with pictures of mice on each one. Players take turns pressing down any number of mice in a single row trying to avoid being the player to press down the last mouse. As soon as the game is over, just flip it over and it’s ready to go again.

About FoxMind Games: Appropriately named, FoxMind, publishes and distributes a cunningly sly array of original games that provide fun and entertainment while underlying beneficial mind-sharpening skills for all participants.  Founded in 2000, FoxMind, based in Montreal, Quebec, the company philosophy is to offer educational games, logic puzzles, spatial visualization, strategy and party games for the whole family. With numerous international prizes already on its mantle, FoxMind sells its product line worldwide and is a documented favorite brand of parents, teachers and fans everywhere. Recently, the company ventured into the dynamic arena of electronic games, with its first offerings for the iPhone and the iPad already available. Additional information is available at www.foxmind.com and through its social media outlets on Facebook, Twitter, YouTube, InstaGram and Pinterest.

*While supplies last.  FoxMind has reserved quantities to allot for attendees at each day of Toy Fair 2015.