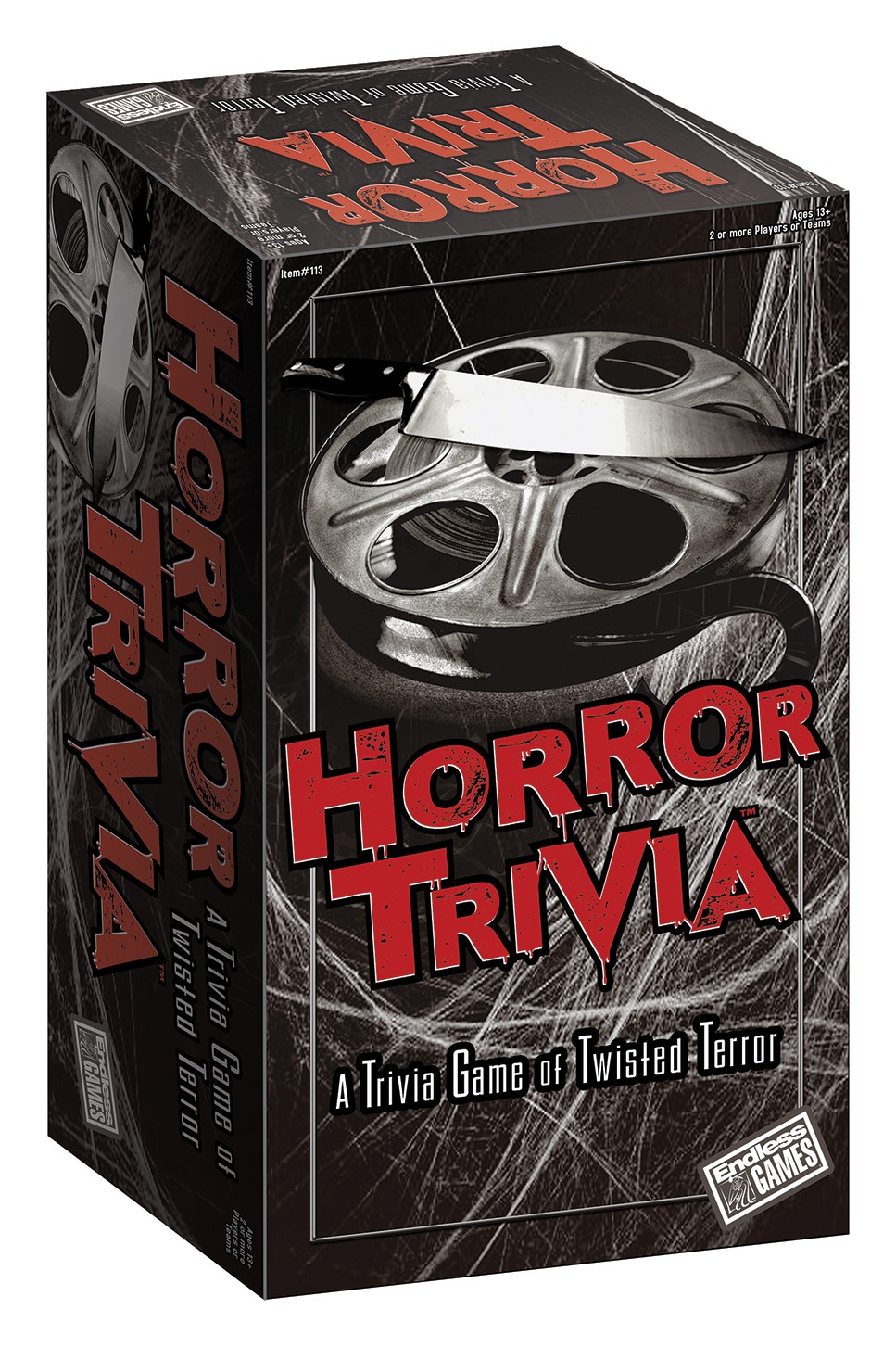 The company slashed its way onto store shelves just in time this Fall to make every fright fan shriek with delight to covet its hauntingly hit game. “It’s a fun new game that is especially fun for Halloween time, or anytime,” Kevin McNulty, founder of Endless Games, said.

Brian Turtle, National Sales Manager for Endless Games, explained, “We chewed into the brains of horror enthusiasts and dissected the details of the entire horror genre to create a collection of more than 300 spine-chilling facts. Then we took all of the gory details and compiled them into the guts of a great new game.”

In the new Horror Trivia Game ($9.99 for ages 13+), two or more players/teams are challenged to correctly answer questions in order to be the first to collect three weapon cards and not become a casualty of the other teams.

“All types of bloody trivia are transfused into this game,” Mike Gasser, President of Endless Games said. “We crafted the questions in the game to appeal to suspense enthusiasts as well as the casual fan. No one should be afraid to play. Any human can play and have a competitive fun time.”

To play Horror Trivia, an opposing player draws the top card and reads the question aloud to the first player/team. If the answer is incorrect, the turn is over, and the game continues with the next player/team and a new card is read. If the team answers correctly, the reader then asks the second question on the card. The team must answer both questions correctly and they win that question card. Each question card has a weapon symbol in the top right corner. The goal is to collect three different weapon symbols.

“You’ll learn a lot about your friends and family,” Turtle added. “When you play this game, you’ll know for sure whose eyes were open during the tense moments of any scary movie and who recalls details of popular horror stories.”

About Endless Games: Founded in 1996 by industry veterans Mike Gasser, Kevin McNulty, and game inventor Brian Turtle, Endless Games specializes in games that offer classic entertainment and hours of fun at affordable prices. The three have an uncanny ability for discovering and developing hit games, having been a part in past successes Trivial Pursuit™, Pictionary® and Six Degrees of Kevin Bacon™. The mission of Endless Games is to produce high-quality entertainment in board games that are quick and easy to learn but offer “Endless” play value. For additional information, visit www.endlessgames.com and interact with us on Facebook, Twitter, Pinterest, Instagram and YouTube.